Saudia Airline – a flight to remember 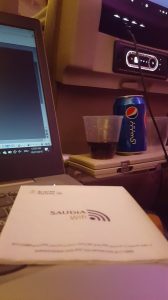 October 2018. I am taking a plane from Saudia Airline to Jeddah and from there to go to Manila/ Philippines. Beforehand I did not think too much about the airline and what that might mean for me and other travellers. And sure thing, I was not the only one who did not know about their cultural implication also while flying. It was an interesting surprise to fly with Saudia. On the one hand, I love to share the unexpected experience because I find it quite interesting and on the other hand, this might be of interest to whoever will fly with this airline in the future and did not hear about that either.

Just before boarding in Frankfurt to go to Jeddah someone of the staff of Saudia was walking around.

Within some stops of that person, the reason became clear: too much skin. In particular, he was approaching girls who were wearing shirts that were obviously too short. They had to put back on their coats before boarding. Besides the women, there was a guy whose shorts were also too short, because they were not going beyond his knees. The boarding staff recommended to pull them a little bit down, otherwise, it might happen that the staff will refuse to board him.

This was definitely a surprise and I would have never imagined that this would happen. When my family and a friend was still around before departing, I was just thinking to check whether I have to behave a specific way at the airport in Jeddah. But I did not think that would be already something to think about before departure.

SO, if you are flying Saudia Arabian Airline, make sure to wear proper clothes. This might also be considered when flying with other Arabian airlines. The guy did not have any other trousers with him that could have meant that he is not allowed to board if the staff says it is too short.

Flying with Saudia: an announcement along the way

At some point during the flight, there was an announcement that no one around me understood, even though it was also uttered in German as well as in English. In the end, we concluded that we flew over a holy place, most likely Mecca. Thus the announcement included that “God may secure us“. Whatever was said, I really could not understand a lot, still impressed me. It was amazing to know that even the airplane company pays that much respect to this place in this kind of way.

Flying with Saudia: a stopover in Jeddah 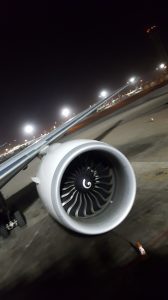 It seems that the airport of Jeddah itself gave me an interesting insight into the culture in this area. Before I go into more detail, I think it is important to note, especially for those who do not know me well that I am well-travelled and that I lived in many places. I respect everyone who is respectful and acts this way. I believe that we are all free human beings and you can live, love and believe the way you like as long as you do not harm anyone.

When I arrived at the airport, the segregation of male and female became clear when we had to go through the scanning. One walk through for women and quite a few for men. I was so shocked. MANY walk-throughs for men and just one on the side for women. That was a clear statement. An interesting one. I sure know of the status of women in this area and other countries but seeing it with things like that makes it more real than seeing any documentary.

Flying with Saudia: taking off in a special way

Here we go. I did not think there would be another surprise waiting for me. Before heading off to the sky, the speakers who did announce the security instructions were giving us a prayer for Allah. Really? That was definitely another kind of surprise. Thus we all listened, and sure some prayed along. To be honest, I cannot recall any word or general idea of the prayer due to my astonishment.

Flying with Saudia: even more convenient for Muslims 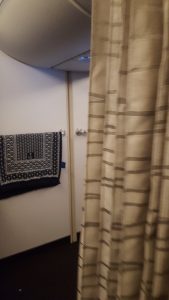 Flying with Saudia Airline was a great experience. I was happy though that the second airplane was a bigger and newer one, as the first flight was with a small, older one. And the second airplane held another surprise in store for me. Actually, I think most people did not recognize this spot and what it serves.

In the back of the airplane is a free spot which I already guessed its usage but also asked to make sure if my guess a right one. I was right. There is a prayer “room” for the Muslims. The “room” is separated with curtains that are open during the flight, as long as no one is praying. Thus people walk past it and sure do not see what it is for. But if you have a closer look you will also recognize the prayer rugs.

Flying with Saudia: a surprise

These flights will stay with me as a long time memory. But I guess it would be nice to know these differences ahead. Especially for those who are also religious but not Muslims, this might be some aspects that come as a less positive surprise along with the flight. I wonder how many people know or would assume that these differences exist.

Please let me know what you think about that and whether you would have expected that. I am really curious to know.

[I was not paid to write this. Just found it quite interesting.]